We can’t expect customers to share their feedback if we treat them with arrogance. And yet, this is the default mode of operation of most incumbents.

“By my count, more business leaders have failed and derailed because of arrogance than any other character flaw.”

As founders rise to the top of the pyramid, they tend to distance themselves from customers – despite being their greatest asset. Harvard (2018) found that on average CEOs spend a mere 3% of their time talking to customers. If customers are no longer a priority to leadership, employees will follow suit, allowing arrogance to creep into the business culture.

In an article entitled “The Costly Pursuit of Self Esteem,” psychologists Jennifer Crocker and Lora Park reviewed the accumulated research literature related to the subject and found that it painted a disturbing picture. They report that programs aimed at elevating self esteem have created all kinds of unintended effects, many of which none of us want. Among these are arrogance, a sense of entitlement, bullying, high degrees of ego defense, and an inability to take even constructive criticism. [source]

However, at the start of their business, most founders had shown incredible humility and compassion. They knew instinctively that success depends on customer feedback and that keeping customers close to their heart was mission-critical.

So what caused the company culture to shift from humility to arrogance?

Shifting attention did. You might have heard of the Tale of the Two Wolves:

The tale is a story of a grandfather using a metaphor of two wolves fighting within him to explain his inner conflicts to his grandson. When his grandson asks which wolf wins, the grandfather answers whichever he chooses to feed is the one that wins.

If our full attention is on digital transformation, risk aversion, operational excellence, market share, or competitive forces we can’t feed our customers. And as a consequence, they stand to lose.

And if our customers lose, we lose.

Practicing humility is important, not just to help your customers win, but also to develop into a better leader and a better person. 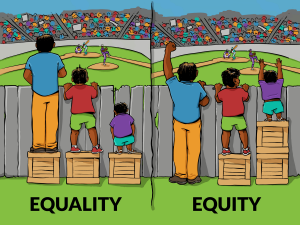